Taking Off the Blindfold for Bird Box

I sat down and watched Bird Box on Netflix earlier this week. Like any bigger budget, A list celebrity horror film I went in with more than a few preconceived notions about what I was going to see. Add to this the social media hype and the racial connotations being ascribed after the fact to the film as well as that ever present “it’s not horror, it’s a thriller” argument and I knew this was going to be a chore. What I expected to be a dull, grueling, and unpleasant watch was

Banishing the Ordinary with The Risky Rabbit

A scaremaker, at least by our definition here at 52 Weeks of Horror, extends beyond those circles of filmmakers and actors who create fright on film. To be a scaremaker all have to do it create art within the horror and macabre community. Write a story. Play a song. Work a haunt. Or in the case of some very crafty folks like The Risky Rabbit, create clothes and other things that embrace the elements of pop culture and classic terror that make up the fabric of our fringe commu

Have Yourself a Scary Little Christmas

The road to Hell is paved in good intentions and my intentions involved writing up as many articles about Christmas related horror cinema and mythology as I could find. Unfortunately, there's not been a lot of time in the last week to research and write any of that and even the handful of pieces I had in mind about Krampus and Christmas ghost story traditions fell through the cracks. As such, here's a quick little list of some awesome holiday themed horror shorts for you to e

Snow is falling, the scent of pine needles is in the air, so it must be… Time to watch some awesome movies and TV shows on COMET TV and CHARGE! Yep, this December the sci-fi and horror classic The Terminator is blasting its way through Comet TV! Check out the classic and the birth of Cyberdyne Systems! If that wasn’t enough to celebrate the holiday season Babylon 5 has a Christmas marathon! After you sip your egg nog and trim the tree, turn on COMET TV for a spacey Christmas

It's that time of the year again where we're all focused on finding that perfect gift for the people in our lives. We want to celebrate togetherness and love and we want to give something really special to the people who mean the most to us. For scaremakers that means trying to find something that not only goes with the spirit of the season but with the overarching theme of horror culture in our daily lives. Stuff that's great usually isn't cheap and stuff that's cheap is, we 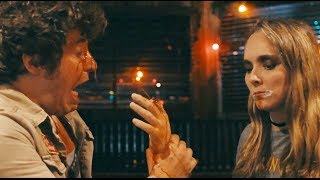 Horror reviewer/interviewer Spooky Astronauts and 15 Second Horror Film Challenge teamed up to produce this immersive how-to filmmaking video showcasing filmmakers' advice and experiences that have the capacity to spark someone who otherwise may not know where or how to start. #SpookyAstronauts #15SecondHorrorFilmChallenge

Mandao of the Dead Exclusively on Amazon

Los Angeles, CA - Mandao Films has announced a resurrection of Halloween spirits with the Digital HD debut of writer/director Scott Dunn's Mandao of the Dead. The spectral sci-fi comedy is now available exclusively on Amazon Instant Video, ahead of an iTunes release in February 2019. The second feature from filmmaker Scott Dunn and producer Gina Gomez, Mandao of the Dead combines temporal hijinks with chills from beyond the grave in a film Horror Fuel calls "a charming winne

Womp Stomp Films, best known for their breakout hit Never Hike Alone are at it again with a film concept that may prove even more terrifying than their last. Pathosis is the story of a woman plagued by mental illness and the monsters that exist between her disease and recovery. Just announced earlier this week, the production is already offering a stunning look at this horrific new short and is once again giving fans a chance to be involved with the production. Pathosis is th

Fairy tales used to be scary. Hell, that was the whole point of them. Stories like Little Red Riding Hood, Three Little Pigs, or The Scorpion and the Fox were meant to be cautionary stories to keep kids in line and out of danger. It's only been in the last hundred years or so with changes in society and the Disney brand gentrification of these classic stories that we've seen warnings about the dangers of trusting strangers or going into the woods alone turn into uplifting mus

Gruß von Krampus, meine Freunde! Krampusnacht, the Night of Krampus, is December 5th. For those of you unfamiliar with Krampus, he is a horned deity of pre-Christian European paganism who is commonly associated with Saint Nicholas. Considered the "Anti-Claus" in popular mythology, while Saint Nick goes around on Christmas Eve rewarding good children Krampus accompanies him to beat the bad children with switches and sticks and to steal away any child who is still awake when th
1
2