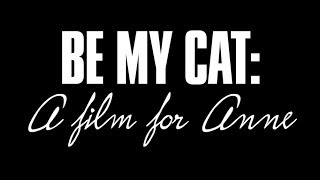 A Deranged Filmmaker Sends a Macabre Invite in Be My Cat: A Film for Anne

LOS ANGELES, CA (April 25th, 2018)-Terror Films has teamed up with Romanian filmmaker Adrian Tofei, to expand the release of his award-winning film BE MY CAT: A FILM FOR ANNE. The film, which had been previously self-released by Tofei onto a few digital platforms, will receive a wider release by Terror Films on Friday, April 27. The genre distributor is unveiling the newly revised poster and disturbing trailer prior to its latest release. Written, directed and also starring

Never Hike Alone is an incredible fan made short film featuring the iconic killer of Camp Crystal Lake, Jason Voorhees. As much a tribute to the Friday the 13th franchise as anything else, the story follows a backpacker who takes a trail camera into the woods on one of his expeditions and stumbles across the remains of a familiar summer camp. He soon ends up face to face with the hockey mask clad murderer in a struggle for his life. I had a chance to talk to director Vincente

Women have always had an integral, if not somewhat cubbyholed role to play in the horror genre. In the earliest days of the genre on stage and screen they became either the damsel in distress to be rescued by the heroic male lead or they were some villainous monstress, a concubine of Satan sent to steer that same male hero into disaster. Even with the emergence of women’s rights and changing views of sex and sexuality in society, the most you could ever hope for was still som

What’s better than a schlocky, B horror extravaganza? A schlocky, B horror extravaganza with a bizarre, sarcastic sense of humor and a -barely- functional alcoholic police officer/werewolf as the lead character. I first experienced Wolfcop in early 2016 streaming it off of Amazon and I wasn’t totally sold before I hit play. The cover art was cool and it looked like it had that 80’s B horror style but looks can be deceiving. What followed, however, absolutely obliterated any d

20 Seconds to Live: An Exclusive Interview

Have I told you how much I love short films? Especially horror-comedy short films? I’m pretty sure I have but I’m going to tell you again just to be sure. From serious frights like Alfred J Hemlock and Balloon to more light hearted, comedic pieces such as Brutal Relax and Bad Cookie, I adore the short film format. In the age of Twitter and Snapchat it’s even arguable that attention spans might not be what they used to be and these shorter formats stand a better chance at succ