From New Year’s Eve to Valentine’s Day, from Easter to the Fourth of July and from Thanksgiving to Christmas, Universal Studios Hollywood adds a demented twist to life’s biggest moments in the all-original Halloween Horror Nights maze, “Holidayz in Hell.” Inspired by the popular scare zone of the same name, the “Holidayz in Hell” maze will feature an original score by Electronic Music Artist and Producer Figure and offer guests new reasons to dread the holidays. A tortured T 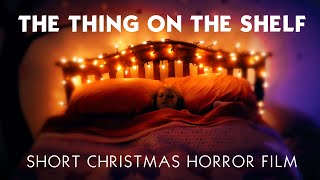 The Thing on the Shelf - A Kid Friendly Christmas Horror

Christmas may be over but there's always that one last hurrah as the tree is coming down and the lights are twinkling their last for another year. It may be a card, a little gift, or that last bit of candy the kids missed but there is always something left behind as the trappings and decorations are put aside and life returns to normal. So imagine my surprise when I opened my email today and found a link to The Thing on the Shelf had been sent to me for review. This Christmas

Have Yourself a Scary Little Christmas

The road to Hell is paved in good intentions and my intentions involved writing up as many articles about Christmas related horror cinema and mythology as I could find. Unfortunately, there's not been a lot of time in the last week to research and write any of that and even the handful of pieces I had in mind about Krampus and Christmas ghost story traditions fell through the cracks. As such, here's a quick little list of some awesome holiday themed horror shorts for you to e

It's that time of the year again where we're all focused on finding that perfect gift for the people in our lives. We want to celebrate togetherness and love and we want to give something really special to the people who mean the most to us. For scaremakers that means trying to find something that not only goes with the spirit of the season but with the overarching theme of horror culture in our daily lives. Stuff that's great usually isn't cheap and stuff that's cheap is, we

5 Etsy Gifts For Your Horror Fan

Gift giving is not the easiest thing in the world; it’s even harder around the holidays. To make things worse, there’s always that one person in your life, that you care deeply about, who’s a die-hard horror fan and you have no idea what to get them. Hopefully, this list will give you a few ideas, or at least a starting off point. Candles are always a great way to show you care and LaughingCrowCandleCo has plenty of them. Each candle comes with a different theme and scent -

Christmas Horror Films To Get You Through The Holidays

I don’t know about you, but as soon as Thanksgiving is over, I like to break the horror hiatus I took after October 31st. I whip up a turkey-mayo sandwich and pop Black Christmas into the DVD player, eager to start the festivities to come. If want your scares to be more seasonal, here is a roundup of holiday horror for you to enjoy with that eggnog. Gremlins (1984) - When a young man unintentionally breaks three cardinal rules concerning his new pet’s care, a horde of mischie